Tis’ the season for carolling and gifting!! Christmas is the time to spend time with your family and enjoy the festive mood around the neighbourhood. This festival is of grave importance to the Christian culture since it celebrates the birth of Jesus Christ. We can see houses decorated with vibrant lighting, small statues of elves, snow (of course), Christmas special cakes, and Christmas special Hanging Door Ring!!

Did you know that the term ‘Christmas‘ originates from the words ‘Cristes Maesse‘, which means ‘mass of Christ‘!? Christmas’ history dates back to over 4000 years ago as several customs and traditions were celebrated before the birth of Christ. We can trace Christmas’ origin back to some civilizations that gave way to this festival. 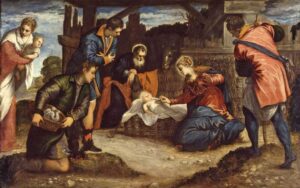 Throughout its history, Christmas has had many names. Nativity, meaning ‘birth’, originates from the Latin word, ‘nativitas‘. Christmas also derives from Christenmasse, meaning “Christian Mass“. However, some say it was the date of Winter Solstice according to the Roman calendar, which was nine months after March 25, the date of Vernal Equinox and the date linked to Jesus’s conception. The first recorded Christmas celebration was in Rome on December 25, A.D.336.

But some wonder, how did Santa Claus come into existence?! We all know Santa Claus is a prominent figure wearing red and white clothes and is portrayed with his eight flying reindeers. The American version of Saint Nicholas, or Santa Claus, originates from the Dutch version called ‘Sint Klass‘. Over the years, Santa’s visual forms have developed. According to folklore, Santa Claus’s home situates near the North Pole and has a habit of filling people’s stockings with gifts on the night of 24th December.

Even though the celebrations are grander every year, the traditions remain among the Christian community-

Christmas is time to get together with your family and enjoy the festive treats to satisfy your belly. People enjoy delicacies that are available only at this time of the year.

Well, all this has got me in the mood to decorate my house with all the Christmas goodies and enjoy some festive treats with my friends and family. Let us know how you are celebrating the season of gifting!!