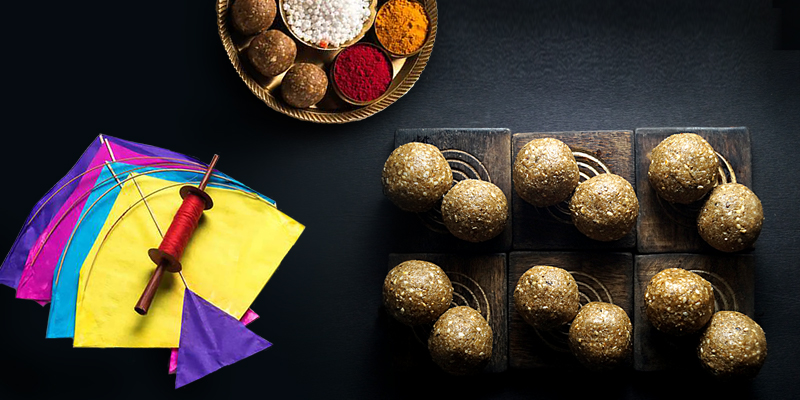 तिळ गुळ घ्या गोड गोड बोला!! is a common expression said while offering Tilgul laddus to guests during the festival of Makar Sankranti. Interestingly, this festival falls on the same day almost every year!!

Well, Makar Sankranti celebrates the farmer’s harvest and occurs in the month of Magha to mark the Winter Solstice. People dedicate their prayers to the Sun God, Surya, and thank him for their successes and prosperity. 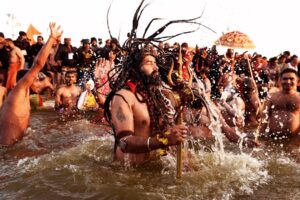 Sankranti is celebrated differently in each state and the festival is known by different names like Makara Jyothi in Kerala, Til Sankrant in Bihar, Odisha’s Makara Chaula, or Maghi in Haryana, Himachal Pradesh, and Punjab.

The rituals to celebrate this festival vary from state to state as some people take a dip in rivers like Ganga, or the Yamuna. Some organise melas or fairs, the most famous being Kumbh Mela, held every four years at one of the four holy locations.

In Uttar Pradesh, it’s called Kicheri, which involves ritual bathing. Several people gather at their respective sacred places for holy bathing and have to bathe early in the morning while fasting. Kite flying is an age-old ritual that involves kite fighting with friends and people from the neighborhood. 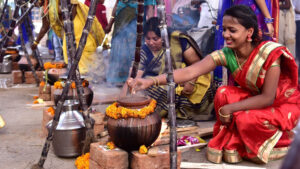 It is a four-day festival in Tamil Nadu, where the first day is called Bhogi. Commemorations are started by discarding and destroying old clothes and other things by lighting them on fire. The second day is called Thai Pongal and is the central day of the festival. They celebrate by cooking rice with milk and jaggery in brand new pots, garnished with brown sugar and dry fruits. Maattu Pongal is the third day, where people offer thanks to their cattle. The fourth and final day is Kaanum Pongal, where people visit their friends and family to convey thanks for their help in the harvest.

Maghi is a religious festival in Punjab. Lohri is marked a day before this festival where they celebrate the new harvest and praise the Sun God, Surya. People light lamps with sesame oil as it brings prosperity and drives away all sins. People dance their Bhangra and sit together to eat delicious food such as kheer and khichadi with some jaggery. 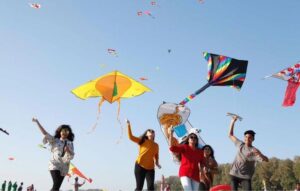 Maharashtra celebrates Makar Sankranti with the gifting of sweets like Gajar ka Halwa, Tilgul Laddu, and Puran Poli. According to folklore, Lord Surya reconciled with his son, Shani, and because of this, Lord Surya visited Shani’s house on Sankranti. That is why people gift sweets to others to forget negative feelings. Traditionally, women wear black clothes as it adds warmth to the body in the winter season. Married women invite friends and family members for Haldi-Kunku, where guests provided Tilgul laddus and a small gift.

The exchanging of Tilgul is understood as a token of goodwill to guests and is greeted with the phrase Tilgul Ghya, aani god-god bola meaning accept this tilgul laddu and speak kind words. The thought behind this is to forget all the bad feelings and resolve them to talk sweetly and remain friends.

Til (Sesame Seeds) and Gud (Jaggery) are winter food as they keep your body warm and increases your immunity as well. While Hindu mythology regards them as a symbol of Immortality, it helps support a healthy digestive system, maintains bone health, and helps generate body heat. Gud contains Iron and Vitamin C and is a traditional remedy for throat problems and some respiratory disorders.

Even though the Sankranti celebrations differ from state to state, til and gud are the hero ingredients to any sweet prepared during this festivity.

To all our Nativites, we wish you a prosperous and happy Makar Sankranti!!