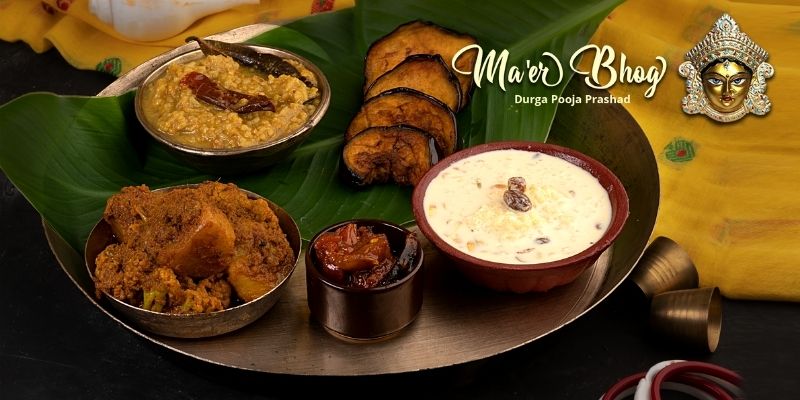 Bengalis celebrating Durga Puja is the epitome of the Navratri festival, ranging from dances and decorative temples to delicious thalis. The different elements during this period make West Bengal a state worth visiting.

Also known as Annabhog in some areas, it’s a festive thali available only during the Navratri. Mainly, the thali is available only for the last three days of Navratri, i.e. Saptami, Ashtami, and Navami. This thali dates back to the starting of the 20th century and mainly consists of veg delicacies, which prohibits onion and garlic. 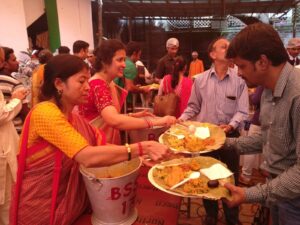 The eighth day (ashtami) during Navratri holds a special place for the devotees as they begin the day with morning fasting. In the afternoon, people gather at the pandals to gorge on the delicious and fresh bhog. Moreover, it’s a platter among the Bengalis at any sarbojonin pujo (community puja). However, a thing to note is that the recipe and taste of this bhog varies between different households. The bhog consists of delicacies with specific ingredients such as khichuri (Dal khichdi), bhaja (fried seasonal vegetables), a vegetable dish, chutney, and a form of payesh. Let’s look at the delicacies offered in this bhog, in brief.

With these elements in the Bhog/Thali, it’s a fulfilling delicacy with a unique taste to give you an authentic taste of West Bengal’s Durga Puja feast. Enjoy!!