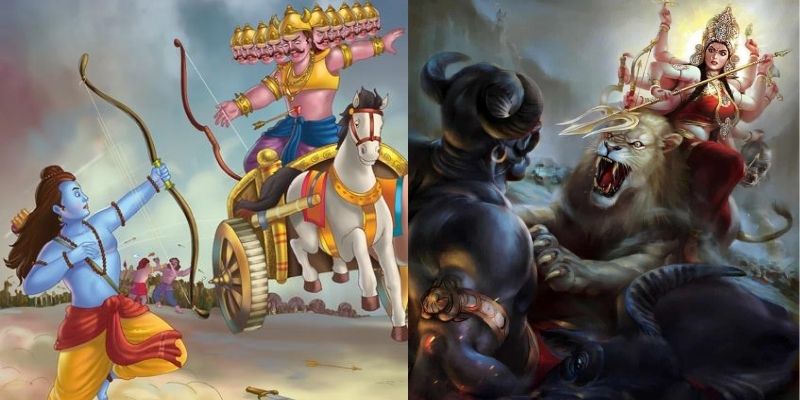 It’s time to grab your sticks and play the festive songs for Garba because Navratri is here!! To describe Navratri in one word won’t do it any justice. That’s because it’s vibrant, energetic, and offers a never-ending feast. It is a carnival celebrated in almost every corner of India and spans nine days. The term Navratri means ‘Nine Nights’, and people celebrate it in honour of Goddess Durga.

Being one of the most significant festivals in India, it’s celebrated four times in a year- in March, known as Chaitra Navratri. However, it is called Sharad Navratri in September/October, Magha Navratri in January/February, and Ashada Navratri in June/July. According to folklore, Goddess Durga has nine avatars, which are,

Moreover, several legends revolve around Navratri in different cultures. Some are-

With a festival, this huge, celebrations tend to differ in different cultures and states in India. Let’s look at some of the most prominent celebrations in India during Navratri.

Although the main attraction is the nine days during Navratri, the tenth day is Dussehra or Vijayadashami. Celebrated a day after Navratri, Dussehra celebrates Durga winning the battle against the demon, Mahishasura. Although, in Northern regions, people celebrate the end of Ramlila, which marks Lord Ram’s victory over Ravana. In western states, the burning of Ravana statues symbolizes the release of evil spirits within us, and people decorate and adorn their household objects such as ornaments, vehicles, and others.

With Navratri being a ritualistic festival, feasting is not popular among people. However, during fasting, some people like to enjoy some ‘upwas’ delicacies. Some follow a strict no-eat diet during Navratri, but some may choose to eat fasting delicacies. Dishes mainly consist of Tapioca (Sabudana), certain Millets, a few milk products, coconut, potatoes, and different fruits. Some famous delicacies include Sabudana Khichdi (of course), Sabudana Wada, Upwas Thali, and many more. During Dussehra, people usually enjoy sweets to commemorate the day.

Wishing everyone a happy and safe Navratri and Dussehra!!