Summers may be a season where the heat cuts short our festive celebrations. But it also ushers in new hope for the people of different cultures. While we all celebrate the Gregorian New Year, we Indians also celebrate our cultural New Year’s Eve according to the Hindu Lunisolar calendar. 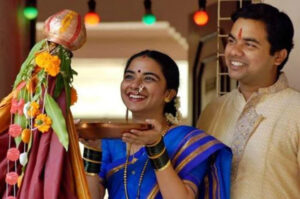 With the onset of Summer and the end of Spring, it’s time to celebrate New Year’s Eve the Indian way!! Gudi Padwa and Ugadi are two such festivals that bring a new age. While Maharashtrians celebrate Gudi Padwa, Andhra Pradesh, Karnataka, and Telangana celebrate Ugadi/Yugadi. Both signify the beginning of an eventful and blessed year for the people. The word Ugadi derives from two words, yug- age and adi- beginning, whereas the word padava comes from the Sanskrit word, pratipad. Pratipad refers to the first day of the lunar fortnight.

With the preparations starting a week before the main event, people purchase and gift new clothes and items, and start cleaning their houses with fresh mango leaves. Offering prayers in temples, preparing festive sweet and savory dishes, and many other activities are the tip of the iceberg. Maharashtrian and South Indian households operate in full swing to prepare delicious delicacies for their family and friends. 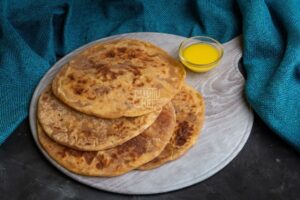 If we try to combine both the festivals’ delicacies, there are around 20 of them. So, we’ll keep it short and let you know the best delicacies that are a must try during this auspicious season.

Puran Poli, a sweet treat, is THE most popular delicacy in both Maharashtrian and South Indian households. A 14th century Telugu script mentioning the recipe of this dish shows how old is this dish. Taking the name of the dish brings distant memories of breaking the flatbread, pouring a generous amount of ghee, and licking every inch of the plate!!

Ugadi is not complete without Ugadi Pachadi for South Indians. While it consists of raw mango, coconut, jaggery, and tamarind, it’s a lip-smacking and healthy delicacy. The dish is a mix of different flavours- sweet, sour, salty, bitter, astringent, and piquant. It’s a symbolic token signifying that one must expect types of experiences in the new year. 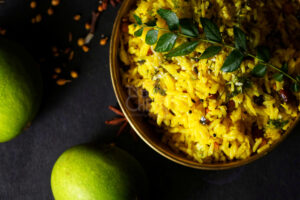 A savory dish that is popular in the Indian households is Kothimbir Wadi. A crispy yet finger-licking dish that’s available all around the year but gains a lot of demand in festive seasons. It acts perfectly as an evening snack and even though it’s deep fried, it absorbs less oil and is a healthy delicacy.

Since it’s the season of Mangoes, you can add a savory mango dish to your list. Mango rice, also known as Kairi Bhaat in Marathi, is also a special dish for Gudi Padwa and Ugadi. Rich with the raw mango flavour and pieces, it uses a few ingredients and uses less preparation time. Whether you enjoy this at lunch or dinner, one this is for sure; you will be craving for more!! 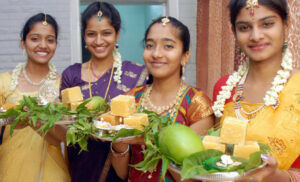 Another must-have during this festive period is Pulihora. While it’s also known as Tamarind Rice, it’s a specialty during Ugadi and contains a generous helping of chilies, coconut, peanut, and turmeric. Traditionally, people serve it as a prasadam in temples but it also acts as a competitor for mango rice.

A sweet delicacy that needs no introduction is the Kheer. With its different types rice kheer, semiya kheer, and many other forms, this also is a popular sweet delight that gains prominent demand during this season. Kheer is a type of pudding that’s part of an ancient Indian diet and has its mentions in Ayurveda. It’s a sweet delicacy that will satisfy everyone’s cravings during this holiday season!!

There are several other delicacies famous during Gudi Padwa and Ugadi such as, Shrikhand, Potato Wada, Masale Bhaat, Sabudana Wada, various assortment of Laddus, and many others.

The main motive of the festival is to welcome a new year filled with positivity. It’s also to mend all broken bonds between your loved ones and a time for reconciliation while sharing festive delicacies.