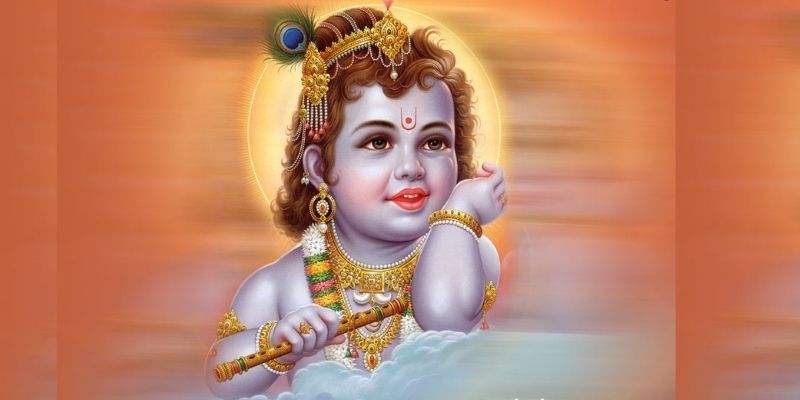 Govinda Aala re, aala!! Who’s blue, mischievous, and has an affinity for Makhan? We all know the answer to that!! Of course, we are talking about Lord Krishna. Popularly known as Shri Krishna, people know him using other names as well, such as Girdhari- one who lifted Govardhan hill, Devakinandan- son of Devaki and Vasudev, Parthasarthy- chariot rider for Arjuna, Gopal- who takes care of cows, and many other names. 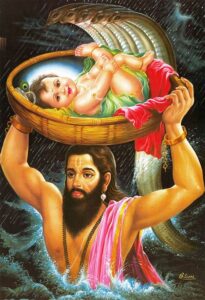 Krishna, the eighth avatar of Lord Vishnu, was born to Vasudev and Devaki in a prison cell. The history of Janmashtami goes back several millennia, and if we keep surveying, there are multiple folklores relating to Krishna and his birth. Moreover, people believe Krishna’s purpose was to make a kingdom of peace, religion, and prosperity. Mathura’s King Ugrasen had a daughter, Devaki, who married King Vasudev. However, this was not accepted by Kansa because he had a prophecy of death from one of their children. Kansa imprisoned Devaki and Vasudev, and whenever a child was born, Kansa would kill them.

However, on the night of the birth of their eighth child, a divine voice asked Vasudev to ferry the child to Nandaraj, his friend. Vasudev found an exit, and with the help of Sheshanag, he was able to cross the raging Yamuna river. Before Kansa could reach their prison cell, Vasudev exchanged his newborn with Nandaraj’s daughter and returned to his wife. As Kansa tried to kill the daughter, she slipped away from him and transformed into the Goddess Durga. She foretold Kansa of his doom which would soon come true.

Krishna Janmashtami commemorates the birth of Shri Krishna, and people from every state and culture celebrate this festival. Janmashtami falls on the Ashtami or the eighth day of the Krishna Paksh or dark fortnight of Bhadon month. For Hindus, it’s one of the most important festivals, where, on the first day, people perform the Raslila (dance drama), which depicts Krishna’s life. At the stroke of midnight, prayers and pujas are performed to applaud Krishna’s deeds. Some children even dress up as Krishna and Radha. The celebrations reach their peak when people go two nights without any sleep and chant bhajans and folk songs connected to Janmashtami.

Festivities for Janmashtami have no end as almost every state and culture has its way of celebrations. Let’s look at some of the famous ceremonies in India-

Although Krishna was named ‘Makhanchor’, his love for eating was immense. Any dairy product, available in Vrindavan, was finished by Krishna and his mates. However, for this festival, there are certain delicacies that you must try, those are- 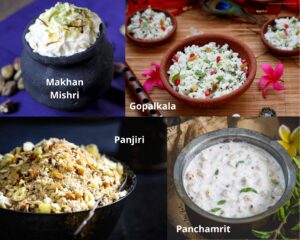 Janmashtami is near, and we hope you have reserved your energy for the celebrations. We wish everyone a happy and safe Krishna Janmashtami!!